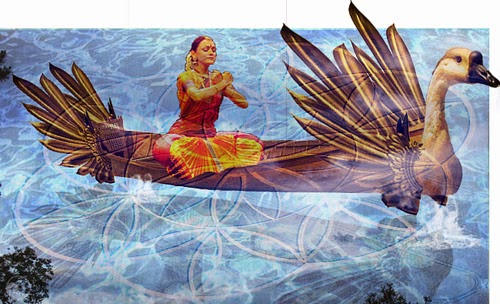 Photo courtesy of Creative Commons by Temari09 via Flickr, some rights reserved.

In early 2007, I met the strongest, toughest, most gentle man I've ever met.  I can truly say I love him.  I mean, I don't know him that personally, but I love the concepts for living he and his practice of the martial arts embody.  He was my Kung Fu Sensei.

I only studied with him for a few weeks.  "Why only a few weeks," you ask.  I now know, that what he was teaching me-to take up my own space, to be centered and strong in my own space, and to deflect aggression with graceful, inner power are still life lessons I am learning.  But, apparently, at that time, I was not ready.  I was finishing an internship to get my massage license, I was taking Level 3 of the Healing Touch Program's path to certification, and I was fighting cancer, but I didn't know it.

Spirit's Way is mysterious.  If I had not experienced the extreme fatigue that came upon me like boulders falling in an avalanche after week five or so of Kung Fu, I might not have pursued the diagnosis.  I'd had a small, but painful, lesion growing on my perineum for years.  I'd had three different medical doctors (none of them GYN Board Certified) look at the lesion and pass it off as "nothing."  I'd learned to live with the pain, but it was definitely interfering with my sex life.

Anyway, after focusing my martial intent on a huge bag upon which I placed the face of my father (more about that later), and kicking the screaming bezeeberz out of it, I came away from class feeling "better than I had in my whole life.," meaning empowered, strong, confident, capable, and liberated.  I remember saying that to a client.  Then boom.  I was flattened by debilitating fatigue.  I could barely finish my internship.
Grant you, the fatigue had come and gone before school and I had questioned whether I'd have enough stamina to do the work, but I'd been determined, an over-achiever to the death.  And that's what it felt like, like I was dying.  Well, I was.  At my root, cells were growing out of control and by the time they were surgically removed in late '07, they were at Stage Four-that's a nebulous demarcation right before they say, "You have XYZ cancer."

Now I say this: WOMEN!  ALWAYS SEE A BOARD CERTIFIED GYNECOLOGIST EVERY YEAR!  Thank God, I did.

Yesterday, four years later, I found myself in my backyard, punching the bleep out of a human who was non-physically present (I won't say his name, but it IS a HE) with serious martial intent (that's martial arts code for I'm going to kick your ass now).  Why?  Because, the memory of myself playing a victim's role with that human and suffering violence at his hand had surfaced with a vengeance and I wanted to clear it out of my field without hurting anyone while at the same time, empowering myself.  No telling how many times I will have to dis spell that memory and others while at the same time not perpetuating the cycle of violence and my belief in it: judge, blame, punish, and attack. No telling,  But I am willing.

I want to be clear.  Without blocks,  Without misguided notions that do not serve the Highest Good, my Highest Good.  Think I have my work cut out for me?  Yep.

So, I came home from doing Healing Touch sessions this afternoon and began pecking around on the internet for information about St. Germain because a client had told me they'd seen an angel in the room with us and I thought it might have been St. Germain (and the violet flame), as I had asked for his presence today.  As usual, I was lead (by Google and my preferences; btw, I love that they call those "cookies!") to this familiar version of the Tibetan compassion meditation on the "zenguidedmeditation" You-Tube channel.

According to visuals embedded in the video, the following are English concepts associated with the Sanscrit words of the mantra:  OM=generosity, ma=ethics, ni=patience,pad=diligence, mi=renunciation, hung=wisdom.  Another source, Awakening the Buddha Within, by Lama Surya Das says it means:  the jewel in the lotus (which might be the concepts above) and is the "divine mantra of unconditional love and compassion."  I like both interpretations, and have used the mantra over these last four years continuously, especially when I cannot get MIND to think my way out of what I FEEL, which is mostly always.  According to Das, the mantra is used to "create a Buddha field."  That sounds like a really good idea in this case.

Back to yesterday's anger.  What MIND told me I needed was an apology from the perpetrator.  I would need to use force to get that and it would create chaos not resolution.  So, I asked for clarity and punched the air.  Later, on Face Book, two different posts of folks I follow mentioned unconditional love.  And today, again, here comes a reminder of unconditional love.  Oh!  Maybe that's it.  Ya think?