Walking the Woods Together 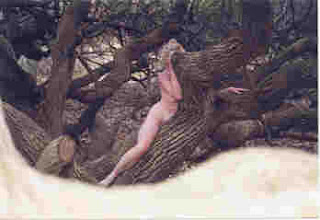 
I've been hibernating.  It hasn't helped.  But I think the worst of the dark energy I've been experiencing is over.  For now.  This kind of being possessed or beside mySelf, makes me quite humble.  It makes me understand "salvation" anew every time it happens.

In fact, ever since the media dethroned Tiger Woods over his sexual indiscretions, I've been wanting to out myself.  I mean, let's just get the whole story out there so "my fans" can make up their minds about me right now.  I don't feel like waiting until you hear it on the news (now that's not entirely likely since I'm neither a star, a politician, an athlete, nor a priest, but you're following me right?).  So here goes.

The truth is, I'm completely human with deep flaws.  I have profound thoughts and sick ones.  Sometimes I feel fearful, depressed, morbid even.  Sometimes I'm sure that All is Well.  I'm more balanced than not most of the time these days.  But I have done drugs (not for thirty years) and delightfully so.  I've drunk too much and driven that way (also not for thirty years, in fact I haven't had a drink at all for that long) and thrown up lots.  I've kissed someone underage and given them pot.  I've kissed another woman (well, actually we were girls then and figuring out how to kiss among other things).  I've kissed a cousin or two (almost lost my virginity to one of them).  I've had multiple extra-marital affairs (another not for thirty years-as you may have guessed, being faithful comes along with being sober).  I've posed naked for a photo shoot.  I'm rather proud of this one.  The young photojournalist (who is now an Episcopal priest) was doing a project for a photography class at UT (that's the University of Texas at Austin-I'll give you the details so you don't have to dig).  She made an A!  My boyfriend and I had the hottest sex ever for days after.  Whew!  I'm glad that's out.   I've screamed profanity at my husband and children and even slapped them all a couple of times.  That's really ugly.  Sometimes, I'm really ugly.

The deal is:  I know it.   And I know, it is only by God's grace that I am as sane as I am today.  I learned what I lived growing up and I've been re-learning ever since I realized  (again by God's grace) that I needed to re-learn.  These days, when I behave badly ( like having a bad mood or a temper tantrum), I ask for forgiveness and expect to get it because I know how to give it.  Believe me, I get as much opportunity to extend forgiveness I as do to ask for it.  And the deal is:  I know I deserve to be forgiven.  So do you.  So does Tiger Woods and on and on and on.  All of us deserve forgiveness.

The trouble is that our culture doesn't nurture the forgiveness concept.  It nurtures the crucifixion concept.  No one is looking in the mirror.  As a culture, we are sufficiently numbed up and distracted by caffeine, tobacco, sugar, alcohol, food, and the Internet and ALWAYS plugged-in to music or texting.  We don't have time to look in the mirror.  We are available to each other 24/7 but not available at all, really.  Especially not to ourselves.  But just you wait until we see someone ELSE doing something wrong!  Kill!  Kill!  Kill! We scream to the rulers.

So you're wondering why I'm ranting about this now?

When I named this blog, I had every intention of being that authentic with you, of trusting you that much, of trusting the Universe that much.  I didn't.  I confess.  Will you forgive me?  And the next time I disappear for days at a time, will you come find me?  We are, after all, walking these woods together.  And I am hoping that some of you, at least, are out here naked too.
Posted by Unknown at 5:42 PM