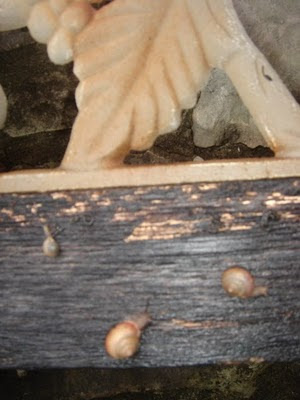 pop the popcorn
drag out the chair
line the streets

a parade is passing!

I sat on the back step with a cup of coffee, the door flung open.  I wanted to be outside, but it was drizzling, so this was as close as I could let myself get to wet.  I sipped, letting the brown brew purge the sleep from my sluggish head.  Wildlife, especially insects, were unperturbed by the rain and busily went about their doings.  At my right shoulder, a snail crawled up the doorjamb.  They seem to multiply and show themselves after a rain, and with all the rain we've had in South Texas this season, snails are everywhere.  So, I almost turned away uninterested.

But I have been re-reading Joy's Way, A Map for the Transformational Journey: An Introduction to the Potentials for Healing with Body Energies

So, because the snail had attracted my attention, and because the words "creativity crawls" had flitted through my mind, I asked, is there more?  This is a crucial moment, not only in the transformational process, but in the writing process.  I got my journal.  Well, I don't have a new one and the last one is spent, so I grabbed a used one from the shelf.  The last entry was dated November 25, 2009 (one month after the funerals of both my parents).  Serendipitously, that entry is also about creature beings!  AND it is about the ability to really see them.  It is about the ability to really see.

Upon our first meeting, an acquaintance who also happened to be a psychic, had asked whether I'd ever "seen" my power animals.  We'd been discussing the sensory ability to smell the scent of discarnate entities.  I'd said, "No, I haven't seen my power animals yet." I assumed she wondered if  I'd seen them in visions or as shape-shifted entities.  I didn't even think about how I see them in the apparent world or during Dreamtime.

I have done some Shamanic Journey work and have drawn my spread of nine totem or power animals from the Medicine Cards: The Discovery of Power Through the Ways of Animals

.  These represent the medicine I carry on this Earth Walk.  All but one of the animals that appeared in my spread are common to this area, so I am aware when I see those particular creature beings, but I sat right there and told the psychic asking me that I'd never seen them.  Harumph!

Apparently my mules wanted me to become even more aware of their presences and messages, because within days, one of them appeared to me in a dream:

a beautiful yellow-brown hawk flew over my head, circled me a few times, then landed on the ground beside me.  I said "Look!  Look!  There it is!  Isn't it beautiful?"  I had been telling someone about power animals when the hawk instantly manifested above me.

A few days after the dream, I saw a sign in a place I have frequented for thirty years that read, "If nothing changes, nothing changes."  It made me realize, again, how long I've been playing a "victim's" role, allowing the energetic imbalances and apparent dysfunction of individuals whose lives touch mine to knock me off balance.  I came home that day determined to paint, to be true to my highest Self, to be the most expanded version of the Self I have been created to be.

I blocked in a copy of a recent sketch, thinking I would paint something to enter in an upcoming contest.  But, no matter how I worked with it, I couldn't force my will onto the canvas.  So, I stepped back.  Turned the piece upside down.  Sat down to stare.  Behold!  I saw the image of an animal taking shape.  As I began to pull the image out, dog appeared!  A smiling, yellow Labrador.

Immediately, I went to the Medicine Cards to read about Dog Medicine:  Be loyal.  Be your own best friend.

Yep, you guessed it.  Dog is another of my power animals.  My totem for the Above Direction:  "teaches me to honor the Great Star Nation, guardian of Dreamtime, my access to other dimensions (Medicine Cards, p. 20)."  And Hawk?  My Eastern Totem:  "guides me to my greatest spiritual challenge, guards my path to illumination (ibid)."


Back to the dream:
I was asking to do work that I really didn't want to do, work that wasn't my work in the world. I knew the two women owners of the gymnasium where I applied for the job.  I was playing me, in my present Daydream circumstances, feeling lack and grabbing at any work to get income. I thought, "this job won't really help me.  It won't empower me.  It will only take me away from my art and my writing and use up all my energy and time."  I knew I didn't really want the job, but I was going through the motions of getting it anyway. Repeating a pattern. But Hawk circled overhead.  "Circle your life and view it from a higher perspective.  Grab an opportunity that is coming your way.  Discern the hazards that bar me from my freedom of flight (Medicine Cards, p.45.)"

Wow! So what does it mean to me to fly?  How does having power feel?  What does it look like to be my own best friend? Can I look beyond appearances of lack and see abundant supply without falling into damaging patterns and belief in fear and lack?  WhooAhh!  Talk about being guided to my greatest spiritual challenges!  Talk about needing to see from a higher perspective!

As for snail?  Well, there's no medicine card for snail.  But yesterday morning, I think she spoke for herself.  And apparently, she has plenty of power!
Posted by Unknown at 10:59 PM